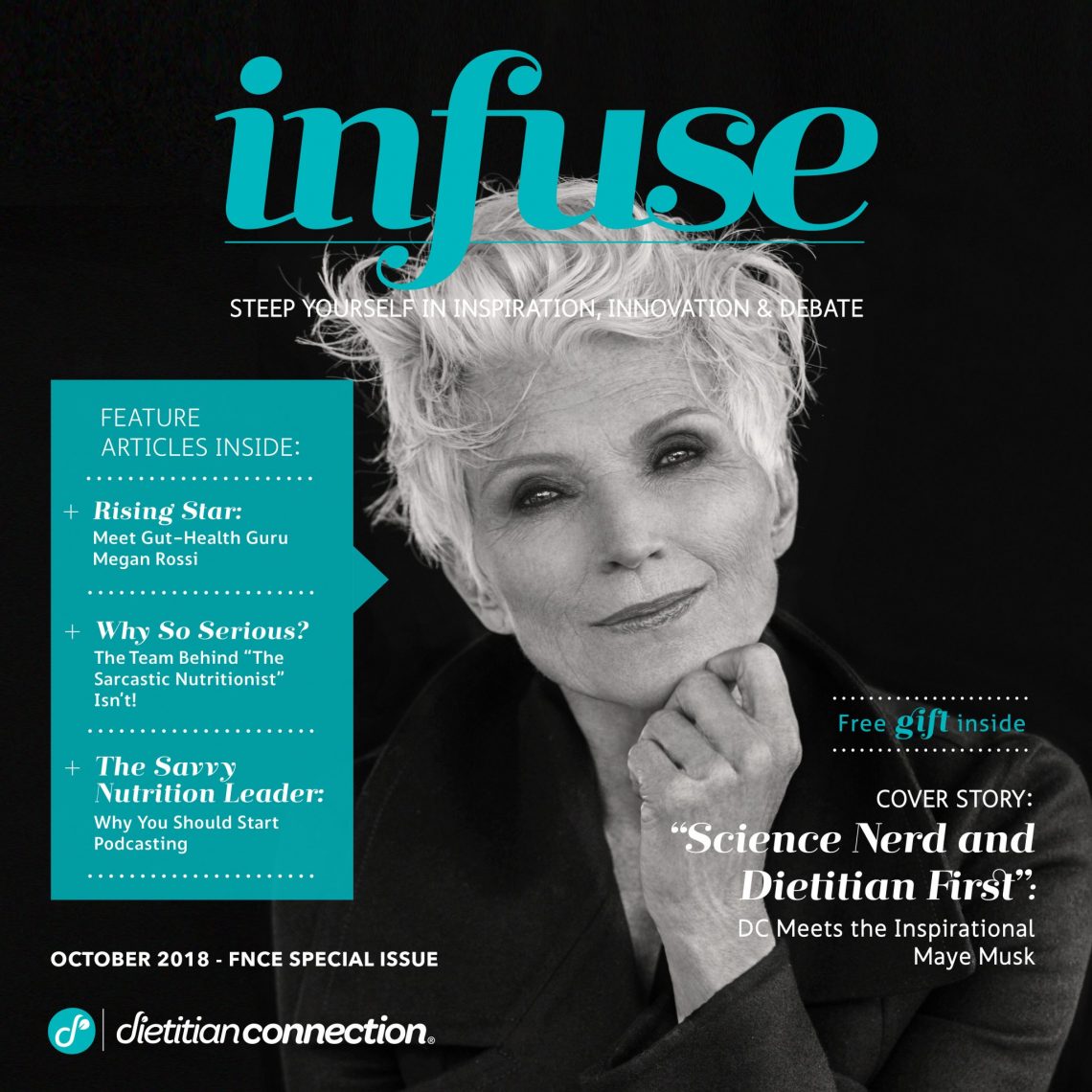 Maye Musk won’t be at FNCE this year. Instead, the dietitian, entrepreneur and fashion model will be in New York, receiving the prestigious Oracle award at Fashion Group International’s Night of Stars.

While these may seem to be diverse career choices, they complement each other well, and often overlap with grace. The Oracle award, as an example, provides Maye with the opportunity to promote the dietitian profession. “They have said in my resume [for the award] that I am a dietitian with two Master of Science degrees, and that’s what impresses everyone,” she says. “We are scientists and modest, but it’s up to us to promote ourselves.

”This is one of the top reasons why we asked Maye for an interview: she’s in the unique position of being able to leverage her high-profile role in the limelight to promote healthy eating and the role of dietitians.

She does, however, prioritise one career over the other: “I’ve always considered myself a science nerd and dietitian first – one who happens to model part-time,” Maye explains.

So: how did she end up becoming the world’s best-known dietitian-model?

During her years as a dietetics student at the University of Pretoria in South Africa, Maye first fell into the role of a nutrition commentator in the media when an English-language radio station needed someone to speak on healthy eating. “I was the only English-speaking  student in the Department. Fortunately, I wasn’t enlightened enough to be nervous or concerned about my knowledge!”

After graduation, she began her career with a private practice in her home while she was raising her children, a set-up she retained for many years for its affordability. Maye was, as she explains, “a typical dietitian: well organized, and punctual.”

Living in Toronto, she took multiple jobs on top of the aforementioned private practice to stay financially afloat: research officer at the  University of Toronto, speaker, nutrition consultant, early childhood education teacher, director of a modelling school two evenings a week – and a model. And as her children got older, she took up part-time rental offices at a cardiologist, OB-GYN, chiropractor, fitness center,  dress shop… anywhere she could afford.

Maye found herself increasingly asked to speak in the media on nutrition topics – but, newly divorced, couldn’t afford to take a day off from her practice. So, she began to charge a fee equal to her lost income. “People paid! That was a nice surprise,” Maye recalls. Soon after that, food companies also began to ask her to give talks or write articles. “That was well-paid and kept me very busy reading  research. I loved that.”

Maye would get booked for modelling jobs three weeks ahead of time, so she would not book clients those days. “I rented a second office full-time,” she recalls. “I had three part-time dietitians who would help me, as modelling became very busy, speaking and media interviews increased, and spokesperson work for the food industry was regular.”

When she moved to New York, she restarted her nutrition business. But life intervened. “When I moved to New York at age 50, I wanted to become the best dietitian in the world. Then my grandchildren came along, and my mother and sister [in Canada] suffered from poor
health,” shared Maye. “My family motto is ‘Family First’. That meant visiting family every month, which is more important than working all the time. Now the ‘Best Dietitian in the World’ position is open for any colleague with the same drive.”

Following a move to LA, Maye again started a private practice and taught at a school but had to quit as modelling and travel took over. Her modelling career trajectory continued to climb, and she hit new milestones; last year, at age 69, she was named as CoverGirl’s oldest spokesmodel ever – making history. Of the many modelling jobs she’s had in her career, she says this is her favourite — and it also came
as a huge surprise!

Today, she travels the world as a 70-year-old-speaker.

“I have given talks on nutrition entrepreneurship and sound nutrition in over half of the States in the U.S., most of the provinces in Canada, all the provinces in South Africa, and in England and Australia. Recently my talks have been in  Kiev, Stockholm, Johannesburg, Shanghai, with many more ahead,” says Maye. In her talks, she shares “the best anti-aging tips: eat well. People are scared of eating and turn to fad diets. I give them science and common sense,” notes Maye. But, she  says, dietitians still “have a lot of work still to do in communicating nutrition messages.”

Maye has reached the peak in dietetics in three countries.

She was the first Representative of the Consulting Dietitians of Southern  Africa; President of the Consulting Dietitians of Canada; Chair of the Nutrition Entrepreneurs and won the Outstanding Nutrition Entrepreneur Award in the USA. Maye has also started a private practice in eight cities, in three countries! This put her in the challenging position of having to write the dietitian registration exams three times: “Once in another language, Afrikaans; once in Toronto at 42, (however, studying in English was great); and once in the United States at 48, where I had to go backwards in time to learn imperial measurements. At least, when I speak at international meetings, I can use metric values, so nothing was lost there!” says Maye.

She is passionate about the benefits of travel and living a global life. “Living in different cities and countries is an education,” Maye says. “You learn the way people think, their many different cultures (especially in large urban cities) and their local foods. When I arrived in Toronto, I didn’t know what an Oreo cookie was. I had to go to the supermarket to look at all the labels to understand what my clients were talking about.”

She’s well-positioned to advise a young dietitian/RD just starting out.

“Be enthusiastic, and share your ideas with your colleagues,” Maye suggests. “Trust me, word gets around, and you will soon be invited to sit on local boards, then national boards.” You have to market    yourself a lot, she urges young dietitians. “Use social media! Share your skills and successes on the Internet. I don’t see enough of that, although ‘nutritionists’ without a sound education are doing extremely well on the Internet and in business.” Maye also encourages those just starting out to remember that “when your children are very young, they take up a lot of your time, and it is hard to be at the top of your profession. Take each stage of your life and do your best.”

She’s also passionate about advancing the profession of dietetics.

Maye was the first dietitian to appear on a cereal box – a unique accolade, and a fresh way to reach the public with nutrition messages. She offers this advice to those who seek to similarly stand out in the cluttered media space today. “I didn’t aim to be on a cereal box, although that was a huge surprise and I loved it. A cereal company had a campaign coming out to make women feel good about themselves. I’d spoken about nutrition and fitness, appearance and self-esteem all over Canada. It made sense to have my book cover, with my photo on it, on the cereal box,” Maye explains.

“Dietitians need to get their name out everywhere, and help each other,” she says. “I started nutrition entrepreneur meetings in  Johannesburg, Toronto, San Francisco, New York, then LA – until my life got too busy, at 67!”

No interview with Maye is complete without a mention of her (famous) children.

Maye’s children, Elon, Kimbal and Tosca, are doing ground-breaking work in their respective chosen professions. She gave them a head-start in life by instilling strong values. “I have always felt that dietitians have good values; we are nurturers,” explains Maye. “My children saw me looking after people and making them happy. My parents were the same. They were good Canadians who were kind, helpful and considerate of all people.” She says, with pride, “I am happy to say my children care about our family, other people, this planet and more.”