Food is the New Internet: Kimbal Musk Looks at the Future of Food – FNCE 2017 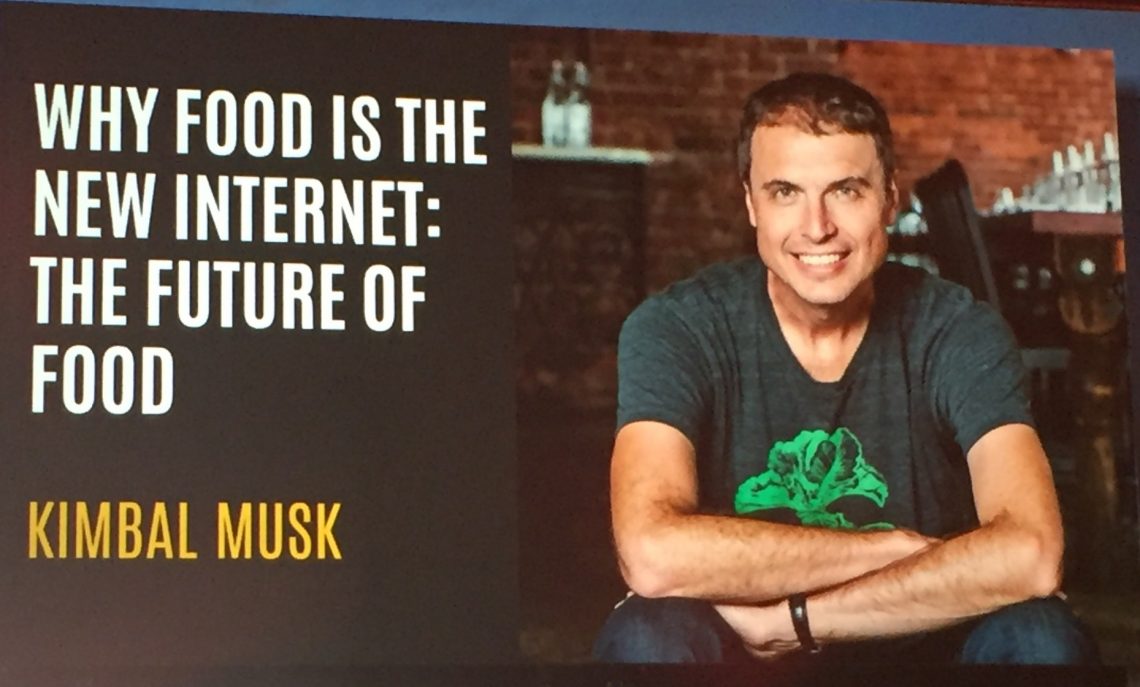 At FNCE 2017, we were lucky enough to hear from presenter Kimbal Musk, co-founder of The Kitchen and brother of famous entrepreneur Elon Musk. He spoke on why “food is the new internet”, and on what he sees to be the future of food.

A trailblazer in the food industry — advancing indoor farming in shipping containers, school learning gardens, and farm to table restaurants — Kimbal’s passion comes from his mother, Maye Musk, who is a dietitian.

Kimbal originally worked in Silicon Valley, in business with his brother, but his true calling – the food industry – was inspired by 9/11. While working as a volunteer, feeding emergency workers in New York, he was profoundly affected by the experience, and in a “carpe diem” move, decided to change careers and follow his passion of food. He began by opening The Kitchen, a restaurant with a focus on farm to table before that was even “a thing”.

Kimbal’s career path then took him back to the business of technology, but he still knew food was his real love.

In 2010, he broke his neck in a winter-sports accident, and was paralysed for three days. Kimbal didn’t know if he would ever walk again – but he promised himself that if he did, he would segue back into the food industry and focus on a way to scale “real food”.

The great news; he did walk again – and kept his promise to himself by creating the restaurant Next Door, a fun and affordable version of The Kitchen.

Firmly back in the business that he loved, he set about tackling school gardens as a project he could scale.  He began by building a learning garden for students in a Chicago school.  His project now includes 450 school gardens across the United States. To this end, he reiterated the importance of reaching children at a young age, and teaching them about food and nutrition.

Farming is the final area that Kimbal has forayed into, with success.  He told the story of Margaret, a proud farmer in Iowa who grows corn and soy.  She was sad because her children didn’t want to farm, and the family tradition would be lost. Kimbal then set out to learn why kids today don’t want to farm anymore.

It turns out they do want to farm – but they want to live in the city, not in a rural area.  So, in response, Kimbal created Square Roots, which are containers for indoor farming. Using these products, one NYC farmer is able to sell premium basil in the city by recreating the weather conditions of 2009 in Italy, which was a bounty year for basil,. Fascinating stuff!

Looking back at his experiences in food, Kimbal then shared the dual philosophies he’s adopted:  people should share a meal together, and food should taste good. He noted that Jamie Oliver is really good at this —at making simple food, tasty.

Kimbal punctuated his presentation by enthusing, “It’s never been a better time for dietitians to shine in today’s food revolution!” Why now? Because food is the “new Internet”, he believes. Consumers are demanding healthier food, and investors are paying attention – and are excited about opportunities in the food industry.