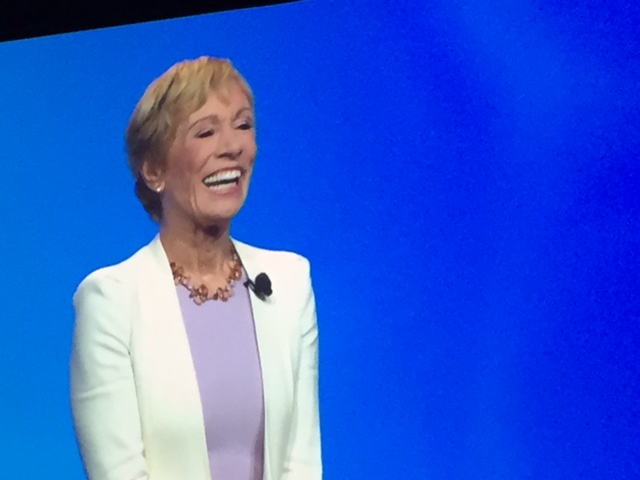 Businesswoman Barbara Corcoran is best known in the US right now for her star role on the States’ version of “Shark Tank”, the much-loved TV show about entrepreneurism. But it’s her hard-earned success as a revolutionary marketer in the field of real estate – in the incredibly competitive market of New York, no less – that secured her reputation as a business leader (and, of course, that seat as a Shark Tank investor).

As the opening keynote speaker at FNCE, the Academy of Nutrition and Dietetics’ annual meeting, Barbara did not disappoint. She shared her strategy for reaching the top of her profession – one she committed to early on, and didn’t waver from.

Let’s rewind a bit first. Barbara’s story begins as one of ten children, incredibly sharing a single bath. Her mum – whom Barbara cites as her key motivator – used to tell her that she had an imagination, and she should use it. So, early on, Barbara moved to New York to use that gift, and live the “American dream”.

Once ensconced in the Big Apple, her then-boyfriend suggested she start a career in real estate, which she did. But the relationship went awry: he left Barbara to marry her secretary. This left her feeling unworthy and lost. To make matters worse, his parting words were, “You’ll never succeed without me”.  (The power of this insult became a motivating force for Barbara in the years that followed: whenever she found herself in a difficult situation, she did everything she could to set herself up for success by taking risks and thinking of one more imaginative idea, every time.)

Creating a Strategy for Success

Barbara now found herself both alone and at an all-time low with her real estate business. She also didn’t have any money for marketing.

And then a strategy began to crystallise in Barbara’s mind – one she stuck to, and rode all the way to Shark Tank-judge success: stay ahead of the competition. This is what that looked like for Barbara:

Timely trends in news and business meant this: Barbara created a new publication, The Corcoran Report, a New York city real estate report which examines the average sales price of real estate in the city.

With this publication, suddenly her real estate office looked much bigger than it was.  Nobody else was publishing such data, and she became the go-to person on real estate for the media.

Ahead of the Curve

Thanks to The Corcoran Report, business skyrocketed. Barbara was ahead of the curve – and the competition. (As an interesting aside, she also created The Madonna Report when Madonna was looking for real estate in New York, which secured Barbara significant media attention.)

She was among the first, too, to use video as a tool to showcase homes to a wider audience of potential buyers, bringing the interiors virtually to those who couldn’t attend an open house.

Having Fun – and Keeping a Balance

Barbara keeps fun a top priority in her work. Creating fun is good business, she says, and it also stimulates ideas.  As such, everyone wants to work at her real estate office, making staff retention easy.

She also works to create balance within her team, and describes this as linking “an expander” with “a container”.  Expanders are your creators, who love chaos, Barbara says.  They need to work with a container, who loves control, and can bring organisation and systems to the workplace.  Barbara notes that we need both to create a successful team.  (Which one are you?)

Her Recipe for Success

Barbara shared a number of lessons she learned along the way, which she still holds dear today:

–       Fail well (if something bad was happening, something good is coming)

In her concluding remarks, she lingered on this question: what is the deciding factor between those who are successful and those who are not? Says Barbara, the difference is not who who you know or how hard you work. The difference is, if you get hit on the head, how quickly do you bounce back?