My Morning with Nigella 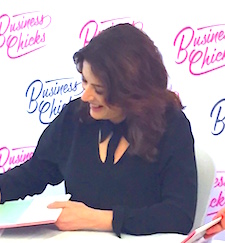 My Morning with Nigella

Last year, when I was offered the opportunity to dine with Nigella   Lawson, I leapt at the chance! Before I knew it, I found myself at   the January Business Chicks breakfast in Brisbane with the food goddess Nigella herself. I learned a great deal about her legendary career, here are my highlights from this special morning:

Much to my surprise, Nigella began her career as a food journalist. In fact, she doesn’t consider herself a cook or chef at all: when asked her occupation, she describes herself as a food writer and broadcaster.

Nigella also doesn’t consider herself a “brand”. Unlike some other celebrity chefs, Nigella doesn’t oversee a big company or a business empire. She only has four employees, most of whom have been with her since she began her career, and she considers them family.  It’s very important for her to work with people she respects, and who can “step up” (and down) when needed.

Most people Nigella works with are females. Indeed, she affectionately calls them her “creative sisterhood”.

Nigella asked the question “when did it all change that we needed an expert to tell us how to cook and raise children?”  I don’t know, but Nigella advocates for getting back to basics and following our natural instincts and family traditions and recipes when it comes to cooking.

Surprisingly, Nigella doesn’t expect everyone to cook.  She points out it used to be okay to say I don’t cook but today there seems to be some shame attached to that statement. She used the parallel of buying her clothes rather than making them herself, and that’s seen as being okay. So why is there a judgment made on whether people can cook or not?

Nigella firmly believes cooking should not be about pressure or stress. For many, cooking can be intimidating because it is seen as a big production – with the results needing to look Instagram-worthy. Instead, Nigella says preparing a meal shouldn’t feel like you’re taking an exam. Start by cooking something simple for yourself, and focus on the process — not the outcome. Just like going from being a couch potato to a marathon runner, confidence and competency take time.

Nigella doesn’t believe in restricting or banning foods; or obsessing unhealthily about food. I couldn’t agree more! She would like people to see food as a friend, and not an enemy.  What’s more, Nigella hopes that this approach will help reduce the number of people who develop an eating disorder.

Nigella was in Australia to promote her new book, Simply Nigella. A special thank you to Bond University for making it possible for me to attend this event.